Jacob is gay. He eats, breathes, and sleeps lgbtqia issues. He is a sociology major currrently working to educate the simpletons. He attends college in the Twin Cities.

Come Join Speak Upp and become a part of the newest developing LGBTQIA podcast! CLICK IT! 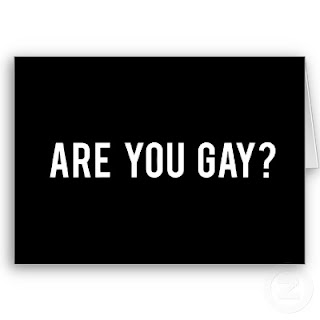 In high school, there was this fellow who I always thought was gay and I also thought he was pretty adorable. Another dirty blond haired guy with no other than blue eyes. I would always get really tense when he was in the hall ways and feel nervous. Even worse, I was sitting in the bathroom taking a crap when I saw there was a planner on top of the toilet paper rolls in the stall. I opened it up and read through all of the comments before finally finding a name. There were some interesting messages and comments in it. Some in regards to marijuana I believe as well.

I got up and headed out of the bathroom. I had planned on bringing the planner to the office when this guy, who I didn't know I had a crush on yet, said, "Hey, did you find that in the bathroom just now?"

"Yah. It was in the boys bathroom stall." I said, handing it to him.

"Sorry, I was going to just bring it to the office." I said acting fidgety and nervous.

I kept my eyes on the speckled hall way floor.

"It's ok. I was just worried someone would read it."

Little did he know I read it? Well, he found out later that I had in fact read it. We had, "kind of" dated. Not really but sort of. He bought me a hamburger at Burger King, my first gay male date! We were in high school, and it was the sweetest thing anyone's ever done for me! Things turned out badly because prior to a liberal arts education, I actually thought weed was a terrible drug. I was wrong! Anyhow!

Over the summer of 2009 I received a FB message from him.

- why unfortunately? and aight. . i'm not going to go around and tell people. it'll get a lot easier for you.

My response - I say unfortunately because it's a difficult thing to be. ive already noticed a difference but im still freaking out not sure what to expect

In school, I always hated it when people would ask me if I was gay. Because it put me in a box. It cornered me. It was either you were gay or straight. And knowing now that there are asexuals, bisexuals, pansexuals, lesbians, gays, and even people who are bi-curious, the more appropriate question would be, what's your sexual orientation? This question does a number of things differently than the question of "are you gay?" But before that, let's look at how uncomfortable you can make someone by asking them if they are gay. I've made this mistake.

Me - Hey I don't want to be rude or offensive or anything. Nor do I want to out you. Being gay myself it can be crazy tough. especially in high school. I am just wondering if you are gay?

Everyone is entitled to their opinions and their questions, yet not everyone is entitled to an answer. No, I neither believe that you are being offensive nor rude. To be honest, I don’t know/understand myself well enough to give you an explanation or answer. I do, on the other hand, have a question for you; why do question my sexual orientation?

(In the genuine and never wavering transparency of who I am in all honesty, the following is the weirdest and most awfully uncomfortable thing I have ever said.)

My response - Fair enough question. I was first wondering about it when I left the administration office one afternoon and you had turned your head back towards me like you had checked me out. Initially I didn't want to think to far into it as people turn their heads to any movement no matter what.

But I saw you again in the auditorium and recognized it had been the one who I thought had checked me out.

But more so I started noticing things at the conference. The funniest thing being when you had put lotion all over your body after coming out of the shower and you had put a shirt on and asked yourself why your shirt was greasy. I was going to answer your question but decided that would be rude.

Glee, hanging with girls, and my good friend said you had skipped happily into Target today. - - - - and I had talked briefly about you. I have been creepily been keeping tabs on you ever since I assumed you checked me out. Terrible of me. But it is how I roll.

The primary reason I ask is because I know the statistics and the brutality of being gay. The objective facts is life is harsh on lgbt students. I am more concerned for you than anything else. Not in a romantic sense though. Just like in general for the lgbt youth.

Hopefully I didn't get to carried away.

So, I tend to be pretty open, honest, and sometimes overly self concerned. It's the thing that people either absolutely love about me, or hate about me. I never received a response. But perhaps, things would have been smoother if I would have asked, what's your sexual orientation?

It's often told to me never to ask if anyone's gay, straight, lesbian, etc. Because it's often viewed as being rude. But, if people view the question as rude, people are blatantly admitting that, in all honesty, being gay is apparently a taboo that no one is suppose to ask about or talk about. But, the real reason the question of "are you gay" is rude, is because it corners people, and makes them uncomfortable something negative. If the answer is yes, you are flaming out of the closet. If the answer is no, you're obviously lying.

However, if you ask, what's your sexual orientation, you will come off as more educated being that there are many sexual orientations. It's sort of like asking someone what their job is. It would be rare to ask someone, "Are you a janitor?". Or, "Are you a professor?". Though, I am sure it happens. The more appropriate and sophisticated question would be, "What do you do for a living?"

I'm gay, how about yourself.

Labels: are you gay, how to ask someone if they're gay, what's your sexual orientation

I think that although asking, "What's your sexual orientation," gives — as you point out — more room for a variety of responses, when you ask a gay person that question you are requiring him to out himself or lie just as much as if you asked, "Are you gay."

I still think a person's orientation is something other people are not entitled to know, unless they need to know it (such as someone you're asking to marry you). So outing, when it happens should be a completely unforced action by the individual coming out.

If it's a matter of having a crush on someone or being in love and "simply having to know," it seems to me that it's on the one who might ask the question to go first and say something like, "I'm gay, and I find you very attractive. Would you like to go to _______ with me this Friday?" If someone can't bring himself to say the first sentence, he has no business asking someone else about his orientation. And even if he does say it, he should still respect the other person's privacy. The other person should still be able simply to say no without getting the third degree about why.

Also, of course, one may just ask, "Would you like to go to _______ with me this Friday?" without the avowal of gaiety, and leave things ambiguous.

Really nice reading. There is a strange connotation when someone asks "Are you gay?" because it is fairly limiting. Now that I'm out and comfortable enough, I really don't mind being asked but it was a much different story growing up.

I think it's perfectly OK to ask if someone is gay in some situations but not others. JUST depends on the situation and who the person is.

For instance I don't believe it's OK for a father asking a young/teen son if he's gay. Same for a teacher asking a student or a football coach asking a high school player. But, in a social environment with peers, no problem.

Donating to Good as Gay

Five reasons you should donate today. 1. You keep coming back to read Jacob's blogs. 2. You would be financially supporting a broke college student. 3. You have a dollar that you were going to spend on a vending machine but you decide Good as Gay is a better cause. 4. You would like to see more blog posts from Jacob in the future. 5. You don't want aliens to abduct you and convert you to heterosexuality. Or something equally disturbing.

Donating to Good as Gay

Five reasons you should donate today. 1. You keep coming back to read Jacob's blogs. 2. You would be financially supporting a broke college student. 3. You have a dollar that you were going to spend on a vending machine but you decide Good as Gay is a better cause. 4. You would like to see more blog posts from Jacob in the future. 5. You don't want aliens to abduct you and convert you to heterosexuality. Or something equally disturbing.