Jacob is gay. He eats, breathes, and sleeps lgbt issues. Currently he is a rural psychology student working to educate the simpletons. Enjoy his blog and his other creative meanderings!

Guncles: Women and Their Love of Feminine Gays!

Sometimes my life doesn't cease to amaze. There is always something to write about unless I am too lazy to write or have other things going on in your life like I did last night. Sorry for not posting last night!

Today in Human Growth and Development the class entered the chapter on sexuality. I was rather excited and unlike high school, I was not nervous. In entering this chapter the instructor asked us to split into groups to divide up the chapter on sexuality. The group I was put with had the subjects of teenager's sexuality and sexual orientation. I was luckily put into a group of women who luckily are statistically more open to gays and lesbians than males tend to be.

I thought everything would be fine. They don't know I am gay and don't necessarily need to know I guess. Or so I thought.

One member said, "I have two gay uncles! But they aren't like the stereotypes!"

Another responded, "Oh really? I like it when they are all feminine. I sort of feel bad for them but they are so cute."

The third pitched in, "Oh yah I know a gay guy who is all into hair design and stuff. I love it when they are all femmy like that! It is great! I think it's so cool that you have guncles!"

I thought to myself, "I could say blatantly that I was gay to them or I could just sit back and laugh at them for coining the term guncle. Which I assume stands for gay uncle. Which really is in essence the epitome of stupidity. In the least, this all would make a good blog post. I should just sit silently and listen." 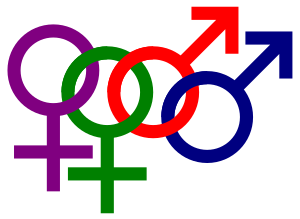 I got to thinking about this whole woman's adoration towards feminine gay guys. They think it is cute when there is a gay guy. Somehow gay guys are closer to how women think perhaps? In the least these gals were kind enough to recognize that not everyone is the stereotype. Her "guncle" didn't act gay at all is what we were informed.

This love for femininity in gay men struck odds with me. Femininity is the negative stereotype associated with homosexuality. This view point is radically spewed often by "straight acting gay guys" who seem to feel being straight acting is a benefit and superior to being "HAY!"

I brought this point up to my friend and colleague from the class five minutes before the Student Secular Alliance meeting started after class. He brought up an interesting question I had not pondered. "What do these women think of "feminine acting straight guys"? Do they hold them to be superior and still capable of mating with perhaps? Would they date a "gay acting straight guy" considering they hold the feminine gay guy to be very cute and positive to hang around? I think I will take a stance and ask this important question as it was suggested to me.

How do you think they will answer? What should I expect? What may be said that I wouldn't expect? Where are you coming from to answer these questions?

I will keep you posted on this topic! Can't wait to read your feedback.

Dear Jacob Woods
I like how you thought out of the box persay. Your friend does have a good point but we all know that females only like us gays as BFFs only. I can't stress this enough, you should become a writer. You are really good at it even if they are blogs.
~Casper

And please becareful on informing others if you haven't told anyone in school. It can have a good out come or a hellish one. Just be safe ok.
~Casper

I appreciate your concern but I only tell others if it is necessary and I can trust people. I have expressed my sexuality with two ethics classes along side a sociology professor, it is a risk but one that needs to be taken light heartedly.

Thanks again for the concern!

Thanks for you kind comments. I already consider myself a writer in some respects. Blogging is definitely one form I have gotten better at over the last year or so.

Just not paying the bills yet! Thanks for all of your support Casper!!!

A Dollar a Day